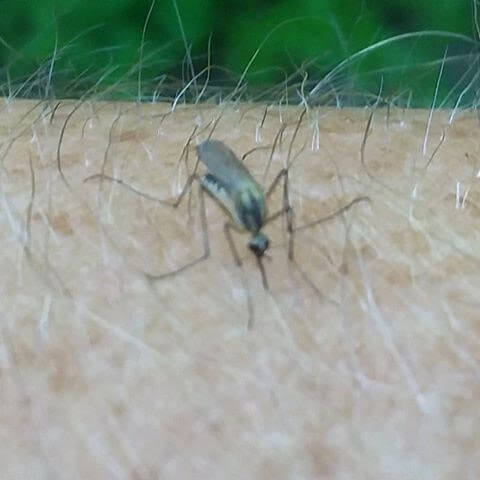 AIl might come as a surprise to some, but mosquitoes are actually considered the deadliest insect on the planet. They are the cause of more than one million deaths each year! Mosquitoes are carriers of a wide range of diseases that affect humans, and even some animals or livestock. Many of these diseases are serious, causing severe illness, birth defects, and even death. From Ebola to malaria, yellow fever, dengue, Zika, West Nile, and various encephalitis strains, the collection of diseases carried by mosquitoes is astounding and frightening.

Thankfully, not all of these diseases are present in the mosquitoes most commonly found here in southeastern Wisconsin. In fact, some types of mosquitoes here do not carry any diseases. But there are also many species here that are carriers of the various encephalitis strains, including West Nile Virus. While there have been few cases of West Nile Virus reported here in southeastern Wisconsin in recent years, it is still something homeowners should be cautious of.

Mosquitoes can live anywhere from two weeks to 6 months and are most active in summer months. Peak activity usually falls in July, but mosquito levels are dependent on the weather because of their breeding patterns. From egg-stage to just before reaching maturity, mosquito offspring require water and warmth to grow. Pools of standing water are typically where this growth and development happens. That is why mosquitoes are most frequently found around areas with standing water, and why their population levels are higher in summers with lots of humidity and rainfall.

While “mosquito season” does vary year by year and population levels can fluctuate, we typically offer mosquito sprays between the months of May and September. While our sprays are effective in reducing populations, no treatment will leave your yard completely mosquito free. This is especially true in cases where homeowners have many areas of standing water. Unless areas of standing water are eliminated the mosquito population will continue to grow, regardless of how many treatments are applied. Advanced Wildlife Control offers a variety of spray packages that our technicians can tailor to fit your specific mosquito control needs.

Where do mosquitoes come from?

Are there any plants I can put in my yard that will repel mosquitoes?

No. There are no plants that have been proven to repel mosquitoes.

Can I use a bug zapper to help control mosquitoes?

Will it kill some mosquitoes? Absolutely! However, it is not considered an effective form of control. In fact, studies have shown that mosquitoes comprise only 4-6% of the daily catch of bugs for the entire season.

If there are bats in my yard, why do I still have mosquitoes?

Bats do eat mosquitoes, but surprisingly they don’t eat as many mosquitoes as previously thought. Studies have shown that only one to five percent of bats’ diets consist of mosquitoes.

What can I do to reduce mosquito populations in my yard?

Mosquitoes love areas that are sheltered, damp, cool and dark. Trimming back vegetation and increasing airflow and sunlight around your yard can help deter mosquitoes. Eliminating areas of standing water is the other main thing you can do to help lower mosquito populations around your home.

What areas are popular breeding sites for mosquitoes, and what can I do to eliminate them?

Do mosquitoes only bite at night?

Dusk and dawn are the most active time for mosquitoes, but mosquitoes can bite or feed at any time.

Are some people more susceptible to being bit by mosquitoes?

Surprisingly yes! Mosquitoes appear to be more attracted to those with higher metabolic rates, or people who are working out or running.

What mosquito-borne illnesses are found in the United States?

Zika – Occurrences of this disease are rising across the United States, with southeastern states most likely to be affected. It can present as fever or joint pain, but most people with the disease will never experience any symptoms. Zika can also cause serious birth defects and genetic disorders if contracted by expecting mothers. There is no vaccine.

West Nile Virus – West Nile Virus originated in Africa, but has since spread across all continents, and can be found across the United States. The fever variant of this disease is usually not serious, presenting as prolonged fever, headache, tiredness, aches or a rash. However, this virus can result in encephalitis or meningitis, which can be fatal. Most people who contract the disease will not have any symptoms. There is no vaccine.

Eastern Equine Encephalitis – This disease affects neural system functioning and can result in death. Humans and horses are susceptible, with birds being the origination of the disease. Symptoms can range from nonexistent to mild fever, headache or sore throat to seizures and a coma. There is a vaccine for horses, but not humans.

St. Louis Encephalitis – Occurrences of this disease are found across the US, most commonly around the Gulf of Mexico. Like the Eastern Equine strain, this encephalitis also originates in birds before being transmitted to humans. Symptoms are similar to Eastern Equine Encephalitis, and there is no vaccine.

La Crosse Encephalitis – This disease was first recorded in LaCrosse, Wisconsin. It is much less widespread than other encephalitis strains, and small mammals are most often the hosts. There is no cure, but fatalities are infrequent.

Western Equine Encephalitis – Birds and horses are most likely to be affected by this encephalitis strain. Humans are also susceptible, but it is rare. There is a vaccine for horses, but not humans.

Dog Heartworm – Caused by a roundworm, this disease typically only affects dogs, hence the name, but can also occur in cats, foxes, raccoons, and relatives of these species (such as wolves or coyotes). It can lead to death in canines. It cannot be cured once contracted but it can be controlled through pills or injections. There are also preventative measures available. It can affect humans, but it is rare as humans are not compatible hosts for the roundworms.

Chikungunya – Occurrences of this disease are typically only found in southeastern states, specifically Florida. However, it is also possible to be contracted through travel to infected areas, predominantly the Caribbean. The main symptom is severe joint pain, and it is rarely fatal. There is no vaccine.

Dengue – Again, occurrences of this disease are typically only found in southern/southeastern states such as Florida and Texas. It is most commonly found in tropical areas. Most cases of this disease are mild, resulting in fever, nausea, and headaches. However, it can result in more serious health complications and even death. There is no vaccine.

Malaria – Occurrences of this disease in the United States are most commonly from travelers or immigrants who have recently come from overseas, specifically Africa but various other tropical regions are also suspect. It presents as fever, headache, and flu-like symptoms. There are more than one million malaria-related deaths each year, and up to 500 million reported cases. Antimalarial drugs are available.

How prevalent are mosquito-borne diseases in the US?

What mosquito spray treatments do you offer?

These sprays are perfect for any customers who just want to try it, are hosting a party or gathering, or have just a few mosquitoes. One-time sprays are usually very effective for mosquito control, but results can vary based on weather. Water dilutes the spray, and a large amount of rain shortly after treatment can lessen the effectiveness.

This treatment plan is best suited for customers with a high mosquito population. It is our most effective treatment option and ensures that your yard will have minimal mosquito activity. These treatments are even more effective if your neighbors join in.

Not every neighbor is required to participate, but the more neighbors who receive spray treatments, the more effective the control will be. We offer discounted pricing to 3 or more households within a neighborhood who wish to use our services.

This twice-a-month treatment plan is the best option for people who never want to see a mosquito. This treatment is most frequently used for customers who hate mosquitoes or are hosting big parties or weddings.

This is our most popular mosquito control option. We will spray treat your home twice during peak mosquito activity. It is not quite as effective as our monthly treatments but still shows serious positive results.

One mosquito spray treatment is effective up to 4 weeks, weather dependent. Water does dilute the spray, and constant rain after treatment can lessen overall spray effectiveness, but weather conditions will be taken into account. We do offer retreats if you are unsatisfied with the effectiveness of your spray. Heavily wooded or neighboring properties are not guaranteed to eliminate all mosquitoes, they must land on treated areas to be effective.

Can I have a mosquito-free yard all year long?

It is almost impossible to have a mosquito-free yard. However, our mosquito control programs do result in hundreds of satisfied customers every year. Our technicians use a product that is guaranteed to not only reduce the mosquito population but also help control the reproduction process. We do also offer a satisfaction guarantee with all of our mosquito treatments.