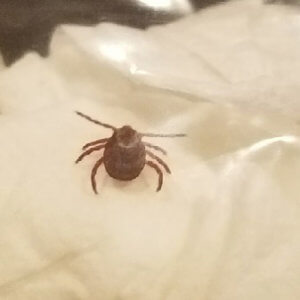 Ticks are actually more closely related to spiders than insects, as they are also arachnids. They can be found throughout the world, mostly preferring warm, humid climates. However, there are a few species of tick found here in Wisconsin. The most common species here in Wisconsin are the deer tick, also known as the blacklegged tick, and the wood tick, or American dog tick.

Unlike insects, adult ticks have four pairs of legs and no antennae. Color and size to vary depending on the species. Deer ticks are often a red or dark brown in color, and fairly small in size, while wood ticks are often larger, and brown with a tan or white pattern. No matter the species, ticks have a variety of developmental stages, all of which feed on the host animal.

Ticks feed on blood, and will congregate in certain areas looking for a food source. They are most often found in wooded areas, with these congregation forming along pathways or clearings. For deer ticks, their main source of food is, as their name suggests, deer, however they can adapt to a variety of hosts. These ticks are most active in the late spring and early summer, with growing females looking for a place to feed and lay eggs. During this time than can easily catch hold of dogs, cats, and humans.

This can be problematic and even worrisome, as deer ticks are carriers of Lyme disease. Bug sprays and protective clothing can help avoid tick exposure for humans, but it is not always so simple. Young deer ticks, known as nymphs, are incredibly small. Often, they are hard to spot, and therefore hard to avoid or remove, until they have already fed for multiple days on a host. Lyme disease is transmitted through the tick’s bite, and can cause serious health issues if not treated.

Did You Know?
It can take days for a tick to complete its feeding!