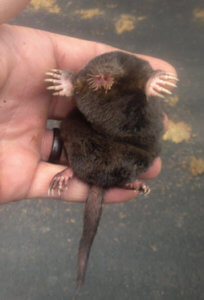 Moles are small, rodent-like mammals that can be a serious problem for homeowners. Built for underground life, they have large flat front paws for digging, and small, ineffective eyes and ears. They have velvety fur, that, depending on the species, ranges from grey to black, sometimes with a brownish hue, and this fur covers their short tails. Most species of mole have small, pointed noses, like the common or eastern mole that is found here. However, the star-nosed mole, the other of the two species of mole found in Wisconsin, has a pointed nose with tentacle-like appendages on the tip.

Moles are insectivores, meaning their diet is exclusively insects. Earthworms are their main food source, but they will eat a variety of insects and bugs. They do not cause damage to plants but may displace or overturn them in their search for food. Molehills are the easiest way to identify mole problems. These hills are created as moles tunnel looking for food. This is a particular issue with the common mole, as they prefer loose, dry soil. The star-nosed mole prefers to reside near water, and as such rarely causes problems.

Moles also create underground tunnels for dens and breeding, but these tunnels are usually much deeper in the earth than their food tunnels. Mole breeding takes place in early spring, with the young born in March and April. Typical litter size is fairly small, only three to five young. These young are reared with the parents for around a month before they will leave the den and find territories of their own. These territories are usually uncluttered, as there are typically no more than five per acre in even the most densely mole-populated areas.

There are only two species of mole that are native to Wisconsin, the star-nosed mole and the common or prairie mole. While these small mammals can be a serious problem, they are actually a surprisingly uncommon pest. In fact, in the years we have been in business, we have only had two occasions where moles were the true culprit. They are often a short-lived problem as well, as most moles do not stay in one area for a long time unless they are able to find an abundance of food in a specific locale. However, if there is a critter damaging your yard, Advanced Wildlife Control is here and help is only a phone call away!

Did You Know?
The damage that homeowners often suspect is caused by moles is more commonly caused by voles!