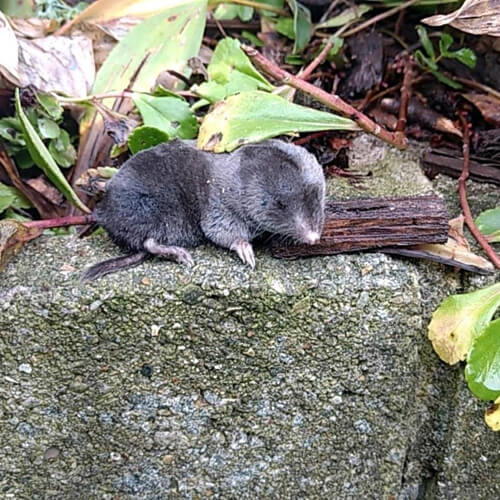 Shrews are small mammals, very similar in size to mice. In terms of build, they are almost a combination of a mouse and a mole. Like moles, they do not have a well-defined head and have a small pointed snout. The rest of their body is mouse-like in appearance. They are usually charcoal or black in color but can have a brownish hue. Also like moles, their eyes are small and ineffective, but they have a strong sense of hearing and smell.

The biggest difference between shrews and mice are their teeth. Unlike mice, whose teeth grow throughout their life, a shrew’s teeth do not grow after birth and, as a result, get worn down over time. They lack the gnawing front teeth of mice and instead have small, spike-like teeth. These spike-like teeth are used to munch on seeds, nuts, and insects. Shrews have a large appetite, caused in part by the fact that they have a surprisingly fast metabolism. They can eat 90% of their body weight in food in one day!

Incredibly territorial, shrews will defend their homes from any potential rivals. Typically a solitary animal, they will only break their solitude to mate. Females can mate up to 10 times a year, with litters possible at any point throughout the year except for winter. After birth, a shrew can live for anywhere from one to three years.

Shrews can take up residence in a wide variety of areas, typically outdoors in wooded areas. However, it is not unusual for a shrew to take up residence around or even in your home. They will nest under decks, stoops and rock beds if possible. If they are able to gain access to your home they can cause damage to insulation with their urine and feces. Our rodent control program can help keep your insulation safe and keep these small mammals out of your home.

Did You Know?
About 10% of a shrew’s body mass is its brain, which is the highest brain-to-body-mass ratio of any animals, including humans!